Answers: Light, moderate, and heavy fog By Jack Williams ©2012 Q: I have seen heavy fog defined as having a visibility of less than 0.3 miles. But have never see what defines a moderate or light fog. Is there some standard? Glen Allen, Va. A: This sounds like a pretty simple question, but isn’t. First, here’s the definition of “fog” from the American Meteorological Society’s (AMS) Glossary of Weather and Climate: “A visible aggregate of minute water droplets suspended in the atmosphere near the earth’s surface; a cloud in contact with the earth’s surface. Fog is responsible for reducing visibility to less than 1 kilometer (5/8 mile).” Aviation weather observations and forecasts, intended for pilots, use “fog” when it reduces visibility to 5/8 statute miles or less. “Mist” is reported and forecast for “foggy conditions” with visibility greater than 5/8 miles. Like you, I’ve seen NWS offices use the terms “heavy fog,” “moderate fog,” or “light fog,” but I couldn’t find these terms in the NWS online Glossary or the AMS Glossary. I asked Chris Vaccaro, the NWS public relations chief. He sent me the following from Paul Stokols, who’s with the NWS Public Weather Services Branch: “The only official definition of fog intensity that I am aware of is in our directive for non precipitation products (10-515) which defines a “Dense Fog Advisory” as a product issued for “Widespread or localized fog reducing visibilities to 1/4 mile or less.” The Weather element allows forecasters to differentiate between F+ (heavy or Dense fog) , F (Fog or Moderate Fog), and F- (Light Fog) and the computer worded forecasts pick up on these distinctions. However, there is no national standard for these definitions.” He notes that most NWS forecast offices would use the code for heavy fog when the visibility is less than 1/4 mile, just “fog” when the visibility is between 1/4 mile to 1 mile and light fog for visibility of 1 miles or more. “These tend to be set by forecasters based on local climatology for frequency of occurrence.”

Barometric pressure changes with local weather conditions, making barometric pressure an important and useful weather forecasting tool. High pressure zones are generally associated with fair weather, while low pressure zones are generally associated with poor weather. For forecasting purposes, the absolute barometric pressure value is generally less important than the change in barometric pressure.
In general, rising pressure indicates improving weather conditions,
while falling pressure indicates deteriorating weather conditions.
Air pressure often indicates cloud coverage
Also cloud coverage generally indicates the daily maximum and minimum air temperature range -
(In general, there is a greater temperature range when skies are clear, and a smaller temperature range when skies are overcast.)
(In general, low air pressure is associated with cloudiness and a chance of precipitation; high pressure is associated with fair weather and clear skies.)
Wind is cause by air flowing from higher pressure into lower pressure.
What causes pressure differences?
The high and low pressure systems usually develop due to temperature differences.
Temperature differences result in pressure differences and this causes the air to move Thus, the greater the change in the air pressure the greater the possibility of strong winds. When it is windy outside, often there is a low pressure system the air is moving toward. How fast the wind blows will depend on the pressure differences between the high and low pressure systems. Very fast winds often occur near cold fronts, low pressure systems. Wind can also blow faster when it is forced into a narrow space. This can happen between buildings and within mountain passes. Thus the following saying-- The higher the high and the lower the low, the faster the wind will flow from the high to the low, and the stronger the winds will blow.

Sustained wind is the average direction and speed for the last 2 minutes.

Wind gust represents the highest wind speed observed in the last 10 minutes.  Gusts are displayed if the gust speed is above 10 mph and at least 5 mph higher than the current (2 minute average) wind speed.

What we call "Solar Energy" is technically known as global solar radiation, a measure of the intensity of the sun’s radiation reaching a horizontal surface. The Vantage Pro solar sensor measures both the direct sunlight component and the diffuse (reflected & scattered light) component from the rest of the sky. The solar radiation reading gives a measure in Watts per square meter (W/m2).  High Solar Energy is the peak solar radiation measured during the calendar day.

By comparing the observed solar energy to the maximum possible for a given time of the day and year a probable sky condition can be determined.  Maximum possible solar energy is derived by computing the deviation from the known solar constant (1366 W/m2) as a function of the cosine of the sun's elevation above the local horizon.  Clear sky attenuation is applied to this value, as a cosine function of the sun's elevation.  The most intense possible radiation is always at solar noon and tapers to zero at sunrise and sunset.  Percent possible intensity is displayed after the radiation value.
Glen Allen Solar Radiation Information - Scroll down to see the daily wind and pressure graphs . 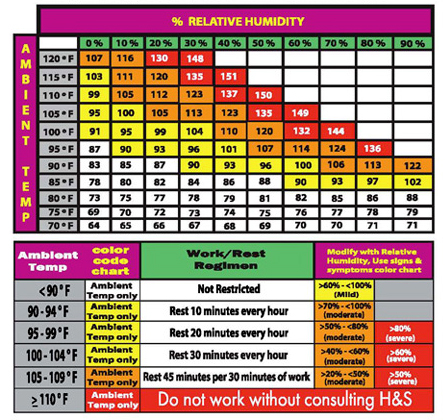 Wind run is measurement of the "amount" of wind passing the station during a given period of time, expressed in either "miles of wind" or "kilometers of wind". WeatherLink calculates wind run by multiplying the average wind speed for each archive record by the archive interval.
For Example:

A Weather Station uses a 5 minute archive interval.
Then the 5 minute archive records are totaled for the 24 hour period from midnight to midnight giving the wind run for the day in miles.
Glen Allen Wind Run Information near the Bottom of the Chart

The only effect wind chill has on inanimate objects, such as car radiators and water pipes, is to shorten the amount of time for the object to cool.  The inanimate object cannot cool below the actual air temperature.  For example, if the temperature outside is -5°F and the wind chill temperature is -31°F, then your car's radiator will not drop lower than -5°F.

Evaporation is the estimated amount of water vapor returned to the air based on measured temperature, relative humidity, average wind speed, and solar radiation.

The wet bulb temperature is a measure of the amount of moisture, in the form of invisible water vapor contained in the air. As the name implies it is measured by a standard thermometer whose bulb is covered by a muslin sleeve that has been moistened by pure water.  This is the temperature air can be cooled to by evaporating water into it and therefore the wet bulb temperature provides a good estimate of how far temperatures will fall if it starts raining or snowing.

Provided that the wet bulb is adequately moistened and given proper ventilation, its reading will always be equal to or less than that of the dry bulb when the air temperature is above freezing. Under certain conditions when the air temperature is below freezing and there is ice on the wet bulb, its reading may be slightly higher than the dry bulb. This is called a negative depression and usually occurs with fog or precipitation. Negative depressions are rare.

Soil temperature is reported to the nearest degree Fahrenheit and is measured at a depth of 5 inches and 12 inches depth beneath a grassy surface.  This data is at the following link.
Glen Allen Soil Temperatures - Scroll down to see the Weekly and Monthly Graphs .